Welcome to my 'horse central'! Here I will introduce you to my horse (with pictures, yay!) and her story. 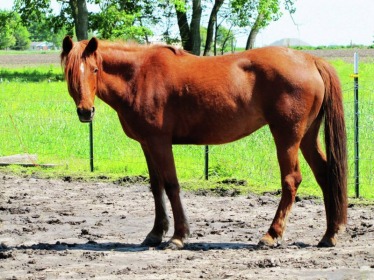 This is the oldest horse that I own. She is 11 years old, a Morgan/Arab mix, and is about 15.2 hands in height (a 'hand' being 4 inches, so about 62 inches at the withers). She used to the the only one I could ride, before Violet got big enough to ride as well. She is rather anti-social and doesn't prefer to hang around people as much as the others do--I blame that mostly on the fact that she was trained by the Amish, and they aren't exactly...ah...considerate when it comes to their horse-training.

Horror story time! When Colletta was 3 or so she started rearing when hitched to a sulky (very small two-wheeled racing cart). Obviously this was a bit of an issue--one time she reared up, fell over on her side, and bent the shaft of our cart so that it was unusable. So my brother (she was still his at the time) called in for some reinforcements (the guy we had bought her from and a friend of his). The method that they used involved attaching some sort of hobbles to her front feet, lacing traces from said hobbles through her harness and back to the drivers like a second pair of reins, and driving her in the gravel driveway. When she would rear, they pulled her feet to her chest so she was forced to fall on her knees, repeatedly, in the gravel. Then they tied her and sat on her head until she stopped fighting. Suffice to say it was a traumatizing experience for all involved (I was maybe 9, and I will never, ever, ever forget it as long as I live).

After watching that go down in a bloody fighting mess I pretty much decided at age 9 to find out better ways to train. I wasn't strong enough to actually start training for real until I was about 13, and I've been working with her ever since. And as of now I can ride her anywhere, put anyone from a 3-year-old to a grandparent on her, and she knows that it's her job to stay calm and listen to the rider.

(She CAN be a bit bull-headed sometimes--grass-diving is a real weakness--and if she gets an 'experienced' rider it is her purpose in life to put them in their place. But otherwise she's a great horse and I wouldn't sell her for the world.) 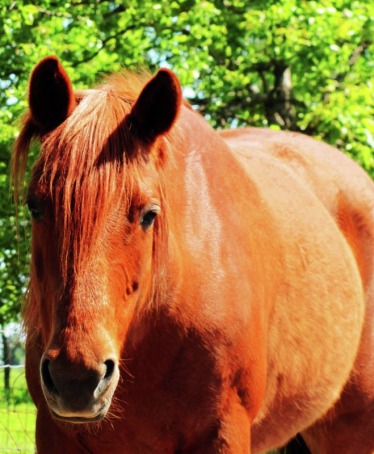 Another picture of Colletta, just because I can